It’s easier to be generous with your money when you’ve got a lot of it – but that doesn’t mean all wealthy people are. In fact, plenty of super-wealthy people are pretty tight – helping them to amass their fortunes in the first place.

Hong Kong film legend Chow Yun-fat, most definitely is generous though. The Crouching Tiger, Hidden Dragon star has accumulated an estimated fortune of $714 million across his four decades in the film industry – and he plans to give it all away when he dies.

In a recent interview televised on South Korea’s Munhwa Broadcasting Corporation, the 63-year-old was asked why he plans on donating all his money and what his wife, Jasmine Tan, makes of it all.

According to Shanghaiist, he said: “My wife strongly supports my decision. When you die you can’t take your money with you, so why not give it to those who are in need?” 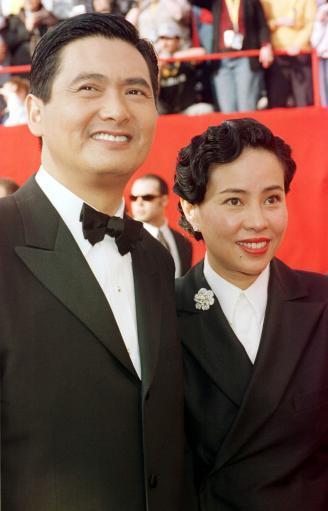 Chow’s wife Jasmine supports his decision to give away his fortune when he dies. Credit: PA

His response indicates that his philanthropic train of thought shows no signs of being derailed. When previously asked about his plans to donate his wealth, he said he didn’t feel the money was his as such.

According to Hong Kong film site JayneStars, he said: “The hardest thing in life is not about how much money you earn, but how to keep a peaceful mindset and live the rest of your life in a simple and carefree manner.

“The money’s not mine. I’m only keeping it safe for the time being.”

As nice a gesture as this is, surely many of us could happily leave our money to charity after enjoying a lifetime of luxury and hedonism – particularly if, like Chow, we don’t have any children to inherit it.

But Chow lives up to his ‘money doesn’t matter’ mantra in his daily life too. He doesn’t cruise across the globe in a diamond encrusted mega yacht, eating champagne-soaked lobsters and wearing chinchilla fur pyjamas. To the contrary – he buys food from street vendors and travels on public transport.

Speaking to JayneStars, Chow said: “I don’t wear clothes for other people. As long as I think it’s comfortable, then it’s good enough for me.”

The multi-millionaire even made do without a smartphone until recently, when his trusty Nokia flip-phone of 17 years sadly popped its clogs.

So maybe this Christmas, rather than bollock our mums for scrimping on the mince pies, we should all take a moment to adopt Chow’s mindset and be grateful for what we have.

Although there’s no way I’d be seen dead with a flip phone.

One thought on “Actor Chow Yun-fat is Giving His Entire $714m Fortune To Charity. Here’s Why.”