A terminally ill boy in the US whose Yemeni mother fought a high-profile battle to see him has died, the Council on American Islamic Relations says.

Two-year-old Abdullah Hassan was born with a brain disease.

His mother, Shaima Swileh, who currently lives in Egypt, was barred from visiting her son under the Trump administration’s travel ban on people from mainly majority-Muslim countries.

She was eventually granted permission to enter the US days before his death. 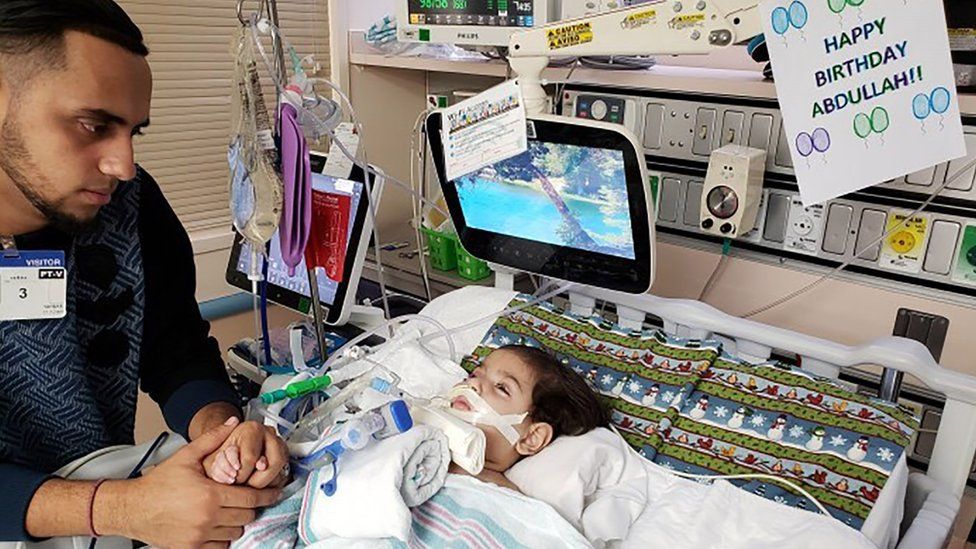 Ali Hassan at his son’s bedside.

Abdullah Hassan died at a children’s hospital in Oakland, California, the Council on American Islamic Relations (Cair), said in a statement.

“We are heartbroken. We had to say goodbye to our baby, the light of our lives,” his father, Ali Hassan, said.

Abdullah and his father are US citizens but Ms Swileh is a citizen of Yemen.

The family had moved to Cairo, Egypt, in order to escape civil war in Yemen when Abdullah was eight months old.

Abdullah was diagnosed with hypomyelination – a brain disease affecting his ability to breathe.

About three months ago, Mr Hassan brought his son to California for treatment.

When doctors in Oakland informed him Abdullah’s condition was terminal, Ms Swileh applied for a visa to join her husband and son.

The family say they received a rejection letter from the state department, citing the US president’s travel ban, and then fought for a waiver. Ms Swileh arrived in the US on 19 December.

The Trump administration’s ban affects nationals from seven countries, five of which are majority Muslim: Iran, Libya, Somalia, Syria and Yemen. The other two are North Korea and Venezuela.

The state department said it was a “very sad case” and that the US tried to allow legitimate travel while protecting national security.